A H-R diagram The red line represents the Main Sequence stars and their evolution toward the top right hand corner of the diagram.

These massive stars continue to exist by burning the heavier nuclides magnesium, silicon, phosphorous et al until they reach the heaviest nuclide that fusion can produce, iron. The iron rich cores of these massive stars can reach sizes equivalent to the Earth. The size of the surrounding shells burning the various lighter elements H, He, C, O dwarf this iron core, as they reach sizes that would extend to the orbit of Jupiter. When the core of a high-mass star consists completely of iron, fusion can no longer take place. At this point, the mass of the daughter one iron nuclide is heavier than the total mass of the parent nuclides used to produce iron.

With this difference in mass, the process begins to absorb energy instead of releasing it back into the star, whichunbalances thethermal equilibrium of the star. For a moment the star releases this abundance of neutrons as neutrinos.


In this brief escape, many neutrinos bombard the iron core and combine with iron nuclides to form the elements heavier than iron. These escaping neutrinos and the electromagnetic forces that repel protons and neutrons force the star into a final expansion. This shock wave ejects all the material of the star, including the core into the cosmos leaving behind only a nebula of cooling gasses. A section of space before the supernova.

The same section of space after the supernova. Stars too big for their britches : Black Holes. Sometimes high-mass stars are too massive to become white dwarfs or neutron stars. A high-mass star this massive also has the gravitational forces to prevent the escape of stellar matter through a supernova. Stars with this great of mass become black holes at the end of their stellar evolution. The matter within a high-mass star in this process is so condensed that the gravity produced is strong enough to prevent the escape of light energy from the cooling radioactive material. 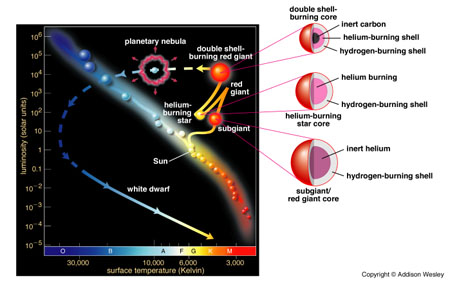 With the star collapsing in upon itself, the star changes from a spherical shape to a broader plane in space. The gravity from the center of this plane curves its surrounding space to create a whirlpool-like drain that absorbs the star itself and all surrounding matter. An Artist rendition of a black hole event horizon notice the whirlpool like shape that leads to the blackhole's singularity.

Birth of stars and evolution to the main sequence

An Artist rendition of a blackhole syphoning plasma gas from a nearby star this acceleration of matter emits x-rays that form a accretion disk and make the blackhole detectable [x-ray emissions represented by the arrows]. To contrast the idea of black holes being places in the universe with infinite lifetimes where no matter including light ever escapes, the universe holds a few exceptions.

The British physicist Stephen W. Hawking has proven that black holes do in fact have definite lifetimes. As black holes reach the end of their life, they begin to evaporate.

In the final stages of this evaporation, the black hole reverses itself and pours matter back out into the universe. When a black hole begins to eject its matter, it is a white hole. With this transformation in the life of a black hole, the universe appears to maintain the fundamental universal energy-matter law with this process. While the black hole, to physics' laws, is an unbalancing factor in universal laws, the white hole exists to restore this matter and balance.

Stellar evolution is the necessary fundamental building block and distributive method of most common elements in the universe.

Within the interior of stars, fusion creates new elements from the basic elements H, He. While this process takes billions of years as measured by human standards, the life of a star is minor in comparison to the age of the universe. When we add the efforts of one star, however, to the production of the billions of stars that have existed, exist and will exist again they are invaluable to the creation of life.

Without the elements produced by stellar evolution the processes within the interiors of stars , Carbon-based life as we know it would not be possible. The next time you are star gazing, remember, you are a product of the stars. HII regions. T-Tauri stars. HH objects. Obtaining information about the interstellar medium ISM. Spectral line shapes.

Myths vs. Standing room only! Four imposing Hubble images are featured. Collect the set! The star that changed the universe The universe became a much bigger place after Edwin Hubble discovered this star. Star clusters on a collision course A massive jumble of stars in 30 Doradus is really two distinct clusters. Hubble's groundbreaking discovery about a distant supernova Hubble uncovers a special type of dying star that may shine a light on dark energy.

Mysterious source of supernova in nearby galaxy solved by Hubble SNR , a deceptively peaceful-looking bubble, hardly hints at the explosive conditions that preceded it. A butterfly emerging from stellar demise in planetary nebula A dying star weaves a colorful butterfly nebula. Fast Facts: Monkey Head Nebula This turbulent star-forming region makes a tantalizing infrared-light subject for Hubble. Fast Facts: Ring Nebula These rings will have you flying through hoops.